Hon. Minister of State For Health

Dr. Mamora is a Medical Practitioner by profession and politician by vocation. He was a Students’ Union Leader while at the Obafemi Awolowo University. He remained in active medical practice as Proprietor/Chairman, Nimbus Medical Centre, Ogudu, Lagos State until 1999 when he was elected into the Lagos State House of Assembly and subsequently elected Speaker at the inauguration of the House in June 1999.

He was elected Chairman; Conference of Speakers of Nigeria’s State Houses of Assembly in 2001 and had a very robust participation in the Commonwealth Parliamentary Association during his 4-year tenure as Speaker.

In 2003, Dr. Mamora was elected into the Senate of the Federal Republic of Nigeria representing Lagos East Senatorial District. He was re-elected into the Senate for a second term in 2007. While in the Senate, he served in various capacities including Senate Deputy Minority Leader, Chairman, Senate Committee on Ethics, Code of Conduct and Public Petitions, Committees on Upstream Petroleum Resources, Selection Committee, Health, Federal Character & Inter-Governmental Affairs and membership of the ECOWAS Parliament.

Dr. Mamora was Deputy Director General (Operations) of the All Progressive Congress (APC) Presidential Campaign Council in 2015, a position he also held in the recently concluded 2019 Presidential Election Campaign. In 2018, he was the appointed the Managing Director/Chief Executive Officer of the National Inland Waterways Authority prior to his present appointment as the Honourable Minister of State, Health.

Dr. Mamora has had many awards, decorations and recognitions both locally and internationally. He holds the honorary Chieftaincy titles of “Apase of Lagos” conferred by the late Oba Adeyinka Oyekan II, Oba of Lagos (2001) and the “Babasuyi of Ondo Kingdom”, conferred by the present Monarch, Oba Dr. Adesimbo Kiladejo, III the Osemawe of Ondo Kingdom.

Dr. Mamora is married with children and grandchildren. 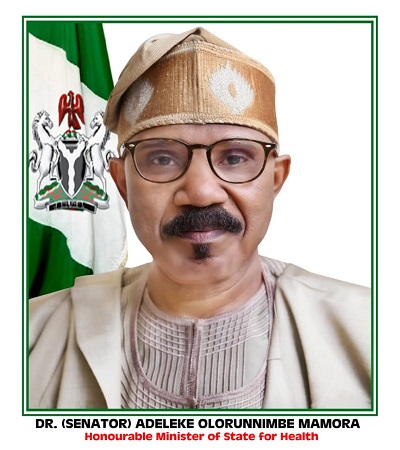