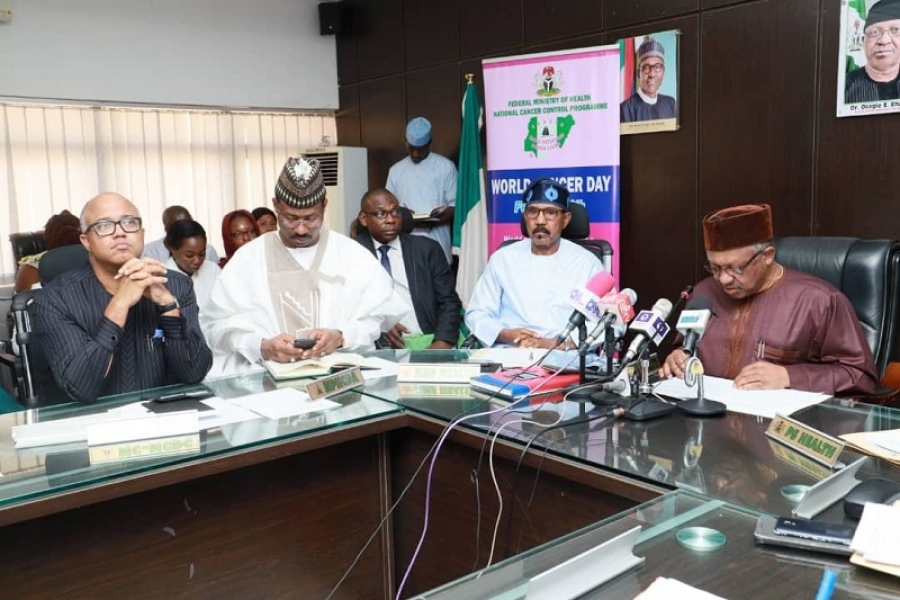 The Honourable Minister of Health, Dr, Osagie Ehanire, has flagged off the 2020 World Cancer Day which is geared towards averting millions of preventable deaths through awareness creation.

Briefing the Press while commemorating the Cancer Day with the theme: ‘’I am and I will’’ play my part to reduce the burden of cancer in Abuja, Dr.Ehanire stated that “some Cancer have definite causative organism such as Human Papillama Virus (HPV) in cervical cancers while others have connection to risk factors such as tobacco smoking or chewing, poor diet, exposure to sun or irradiations. Many others occur during exposure to hydrocarbon while heavy metals are also suspected of being factors in the increased incidence of cancer in the Niger-Delta”.

He noted that globally most cancers are breast, cervical, prostrate, colon and rectal (colorectal) cancer which are very common in Nigeria. He noted, although general signs and symptoms are not very specific in some patients, different symptoms like fatigue, weight loss, pain skin changes, change in the bowel and many others can be obvious.

The Minister added that ‘’According to the Nigeria National Cancer Prevention and Control Plan (2018-2022), cancer is responsible for 72,000 deaths in Nigeria every year with an estimated 102,000 new cases of cancer annually.

He explained that the top five (5) cancer burdens in Nigeria are prostate, liver, Non- Hodgkin’s lypmphomo, colorectal and Pancreatic for the male and Breast, cervical, liver, colorectal and Non-Hodgkin’s lymphoma for female. For these, breast and cervical cancers are responsible for approximately 50.3% of all cancers in Nigeria’’.

The Minister disclosed that to address the rising scourge of the disease, the National Cancer Control Programme (NCCP) was established in the Federal Ministry of Health in 2008 which gave way to the Nigeria Cancer Plan 2008-2013 as developed.  This, according to the Minister has been reviewed in the Nigeria National Cancer Control Pan 2018-2022 which was launched in 2018.

He further disclosed that the country has met the condition for GAVI to introduce the HPV Vaccine into the National Immunization Scheme. It will commence in the year 2021 adding that cancer awareness jingled has been developed in the three (3) major languages of Hausa, Yoruba and Igbo for public enlightenment which includes English and Pidgin.

Furthermore, screening services for early detection constitute part of the preventive measures. This is with a view to treating precancerous lesions (‘screen and treat’ strategy) and referring positive cases appropriately.

Dr. Ehanire informed that government is partnering with the American Cancer Society (ACS) and Clinton Health Access (CHIA) to make 16 chemotherapy medications available at 65% cheaper than current market cost which was launched on the 29th October, 2019.

The Health Minister also hinted that government has laid a solid foundation upon which it will build to take Nigeria to that enviable level- the hub of cancer management in sub-Saharan Africa, in order to curb medical tourism and reduce capital flight to barest minimum.

The Honourable Minister of State, Health, Dr. Olorunnimbe Adeleke Mamora, stated that cancer kills more than malaria, HIV and tuberculosis combined adding that low and medium income countries (LMICs) are more affected with 57% of new cases and 65% of deaths in Nigeria with about 72,000 deaths occurring yearly from cancer.

He maintained that the Federal Ministry of Health  is leaving no stone unturned to ensure that the common man on the street have access to affordable cancer diagnosis and treatment facility across the country thus reduce the incidence and prevalence of cancer and improving the quality of life of people affected by the scourge in Nigeria is achieved.

The Permanent Secretary Health, Mr Abdulaziz Mashi Abdullahi who was represented by the Director, General Services, Mr. Felix Ogenyi, stated that a lot of resources have been committed by the Federal Ministry of Health in the areas of awareness creation, screening for early detection and prompt treatment, capacity building and provision of robust policy framework for different cancers. However, a lot of capital intensive infrastructures have also been deployed in our federal tertiary Health institutions for specialised cancer diagnosis and treatment.

He commended the World Health Organisation (WHO), Clinton Access Initiative (CHIA) and other partners to join hands in tackling the highly dreaded cancer menace ravaging the entire world, especially in Nigeria, as the Federal Ministry of Health, under this administration is committed to taking the fight against cancer to the next level which is in line with Mr. President’s Next level agenda.