Dr. Osagie Ehanire Welcomes Proposal Of Partnership & Support On NEMSAS, Others, From NMA. 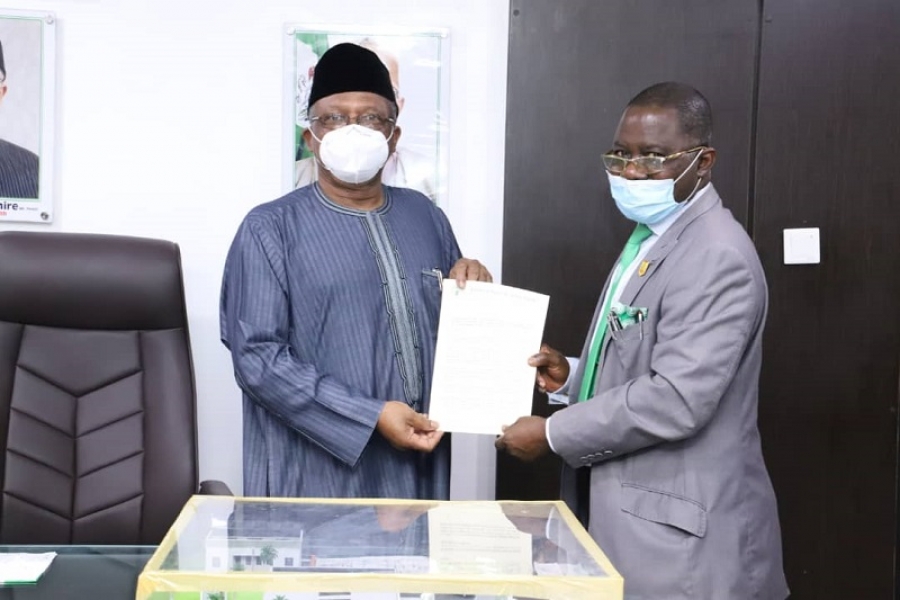 L-R The HMH Dr. Osagie Ehanire and Dr. Innocent Ujah (NMA) presenting his speech to the Honorable Minister of Health.

The Honourable Minister of Health, Dr. Osagie Ehanire has expressed appreciation to the new executive of the Nigeria Medical Association (NMA) led by Prof. (Dr.) Innocent A.O. Ujah, FNMA, mni and has also welcome the offer of partnership and support from the medical association, a body to which he acknowledges that both the Honourable Minister of State for Health, Dr. Olorunnimbe Mamora and himself and other Doctors in Federal Ministry of Health (FMOH) belong.

Dr. Osagie Ehanire stated that he was particularly happy to hear of the offer of support and partnership from the new executive of NMA:  “There is nothing we need more than the support of NMA.  All of us here are doctors and therefore and integral part of what you are doing and you are our key partner in whatever we are doing here at the Ministry.”

The Honourable Minister further said that he was also happy to hear of your support particularly about National Emergency Medical Services and Ambulance Support Scheme (NEMSAS).

The NMA had earlier proposed to partner with FMOH “with interest in not just as a stakeholder in Health in Nigeria but that of FMOH”; as well as support for the Ministry’s proposed project which it is now working to put in place – NEMSAS.  Dr. Ehanire revealed to his visitors that he was earlier in a meeting with the NEMSA’ Committee and has directed that NMA be a part of the Committee and promised to bring more of the NEMSAS project, which is “an innovative way to save lives”, to the attention of NMA very soon.

Dr. Osagie Ehanire further tasked the NMA Executive to find for FMOH “what percentage of maternal mortality arises from the fact of not being able to get to hospital or for getting to a hospital and finding it closed?”  He itemized the benefits of an emergency ambulance service that is readily available and assessable to serve the needy at emergency times and charged the NMA Executives to come on board the planning for this.

The Honourable Minister of Health also expressed his appreciation to the new NMA EXCO for its offer to work with FMOH Team on COVI-19 adding that the target of his team is to ensure that every local government area has a testing site, a general hospital, if not, a primary health care centre, so that samples can be collected and taken to test centers.  “We want every centre to have a holding room before and ambulance arrives to take a patient off; that means we attend to the vulnerable and we attend to people before they get clinically very unwell.”  He proceeded to show his visitors the table model of approved Primary Health Care for the country.  “We want to depress our case fatality rate to less than 1%.”
While responding further to some of the issues raised in the earlier address by the President of NMA, Dr. Ehanire said that the Health Insurance is under reform to make it mandatory in collaboration with States’ Government which has States’ Insurance Scheme with a target to achieving the universal health coverage.

On the request for the extension of the retirement age of Medical Doctors, Dr. Ehanire said he sympathized with the NMA:  “I think people can still give a lot after attaining 60 which was set I think when people’s life expectancy was low.” He also directed the NMA to give him “a rationale for the suggestion for a Surgeon General; what is the duty, terms of reference, so that we can understand directly what help it will bring.”

On NMA’s request for the Honourable Minister to assist its cause to have the Yayale Ahmed Committee’s report come to implementation, the Minister confessed that he does not know how far the Government has gone on it.  He said he is not acquainted with how far Government has gone with the Yayale Ahmed Report except that the report has been undergoing reviews.  “What will come out of it, I cannot tell you.  Government is naturally very careful about taking any step, without knowing the consequences.”

Earlier, the Honourable Minister of State for Health, Dr. Olorunnimbe Mamora commended the immediate past EXCO and congratulated the new team challenging the NMA to find a way to bring the President to attend some of their functions noting that the medical profession is a very dignified one and cautioned the Association to stand firm on principles and guide the young doctors – NARD before young doctors will seek to outpace the older and experienced ones in the leadership of the NMA.

The new NMA EXCO President, Prof. (Dr) Ujah requested to partner FMOH; the Ministers to facilitate payment of all outstanding allowances and entitlement of doctors and review same upwards.  He also request FMOH to fast track NMA’s proposal of a new scheme of service and retirement age of 70 years of special grade 1 consultant and 65 years for others; resolution of conflicting professional regulating bodies e.g. Medical and Dental Council of Nigeria (MDCN) vs Medical Laboratory Science Council of Nigeria (MLSCN); expand employment quota for doctors and central pooling and distribution of house officers and reviewing and implementing the Nation Health Act (NHAct).