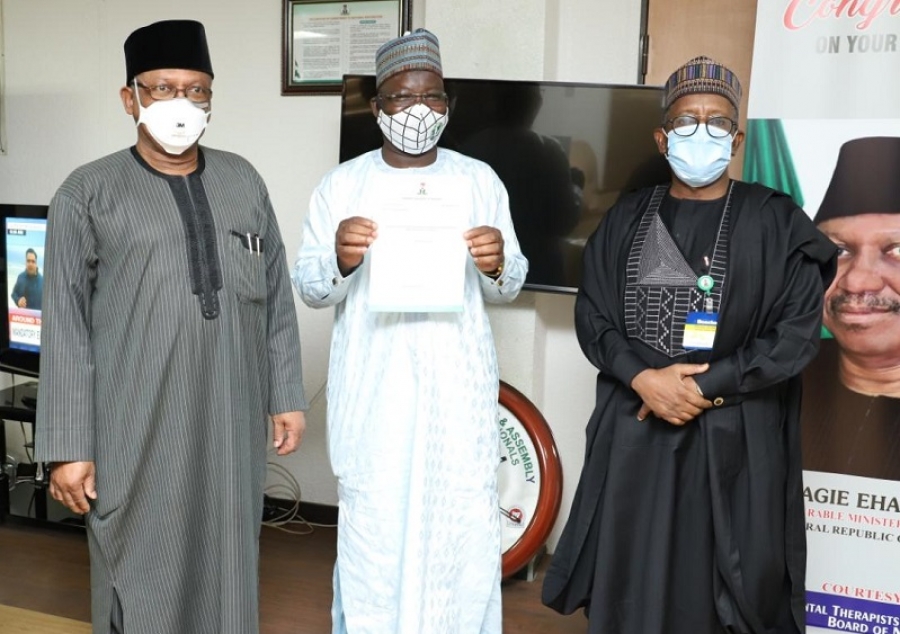 Group photograph to mark the event.

The Honourable Minister of Health, Dr. Osagie Ehanire has conveyed the approval of the reappointment of Mr. Faruk Umar Abubakar as the Secretary-General/Registrar, Nursing & Midwifery Council of Nigeria for a second and final term of four (4) years, with effect from 4th October, 2020.

Mr. Faruk Umar Abubakar acknowledged his reappointment as the Secretary-General/Registrar, Nursing & Midwifery Council of Nigeria at the Honourable Minister’s Office on Tuesday, 15th September, 2020 with the Permanent Secretary, Health, Mr. Marshi Abdullahi present.  Thereafter, a formal presentation of the letter of reappointment was made by the Honourable Minister to Mr. Abubakar.

While conveying his congratulations to the Registrar, the Honourable Minister of Health, Dr. Osagie Ehanire through the letter, charged Mr. Faruk Umar Abubakar whose appointment was renewed for a second and final term to “improve on the gains so far recorded at the Council towards achieving your (the) mandate of efficient regulatory functions.”

Tweet
We Want Collaboration, Interaction, Partnership With All Sector Of The Society In Fight Against COVID-19…Dr. Mamora Though We Continue To Record Declining Positive Rates Of COVID-19 Infection Every Day, We Are Reluctant To Conclude That We Are Halting The Spread Of The Disease Says Minister Of Health