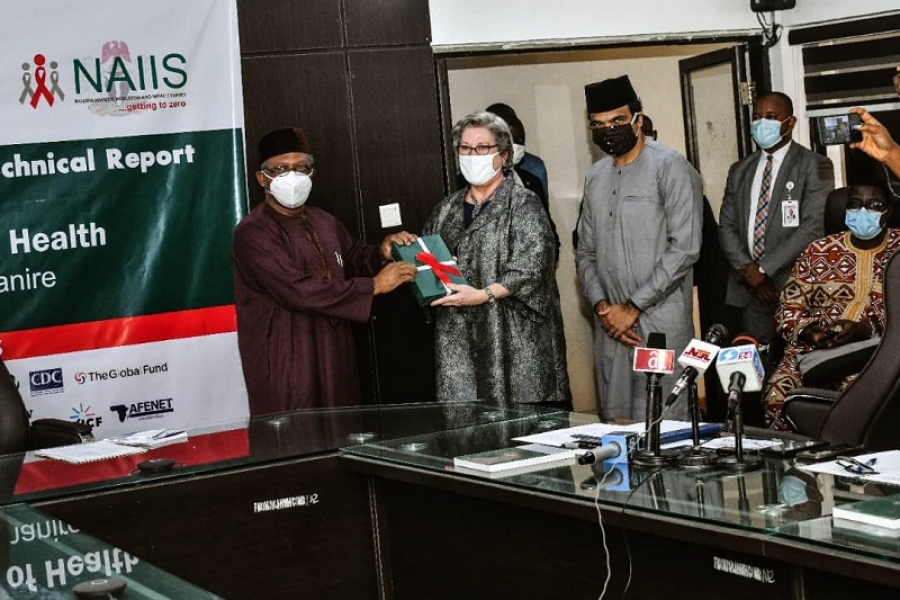 HMH Dr. osagie Ehanire, receiving the NAIIS Report from the US Ambassador to Nigeria, Her Excellency Mary Beth Leonard while looks on.

The Honourable Minister of Health, Dr. Osagie Ehanire has applauded the Nigeria Aids Indicator And Impact Survey (NAIIS) describing it as the most reliable estimate of national HIV prevalence and incidence “not only in terms of the large number of households reached, but in its geographic scope which included all 36 states and the Federal Capital Territory.”

Dr. Ehanire gave the applause to the NAIIS report while receiving the document on behalf of the Federal Government of Nigeria from Her Excellency, the Ambassador of the United States to Nigeria, Ambassador Mary Beth Leonard, at a very brief ceremony held at the Honourable Minister’s 1st Floor Conference Room of Federal Ministry of Health on Friday, 25th September, 2020.

The Honourable Minister described the benefit of the survey over previous response: “With the survey, we have evidence to help us map out the road to end the HIV epidemic in Nigeria, rather than previous operations by estimates and guesswork. We can already see incremental benefits from application of the new knowledge, as compared to previous effort, and the progress made in anti-retroviral therapy coverage of people living with HIV, along with viral suppression levels”; summing up that “This final report is an important reference document to inform our policies, programmes, and funding priorities”

Dr. Ehanire expressed the commitment of working with Federal Ministry of Health (FMOH) partners “to achieve epidemic control, by strengthening the evidence base for decision making as an important component of the next phase of work.”

The Honourable Minister further assured of “building capacity in human resources and infrastructure for better monitoring and tracking” disclosing that his Ministry had laid a foundation through the National Data Repository, to improvise routine HIV surveillance.”

Dr. Ehanire also pledged that “We shall, in addition, continue to conduct Integrated Biological and Behavioural Surveillance Surveys (IBBS) for key populations, to ensure that no one is left behind” expressing his pleasure to note that the fourth round of this survey is now in process.”

The Honourable Minister pointed out the changing needs of HIV response in Nigeria, especially the competing priorities occasioned by the COVID-19 pandemic.  He said: “Mobilizing additional domestic and international resources will be critical for sustaining the gains we have made.”

While the Minister was thanking the donors and partners for their contributions, he solicited also for their continued support.  He expressed appreciation to the United States Government “for the significant financial contribution that enabled NAIIS implementation” while he also acknowledged “the additional funding provided by the Global Fund.”

Dr. Ehanire also expressed appreciation for the technical assistance received from UN agencies like the UNAIDS, WHO and UNICEF, “as well as other stakeholders and partners”, thanking the University of Maryland, for “its role as the Technical Support Organization for the survey”; the Director-General of the National Agency for the Control of AIDS (NACA), “for his role in leading the University of Maryland team at the time of survey implementation”; and “all those who brought their experience to bear in support of the project.”