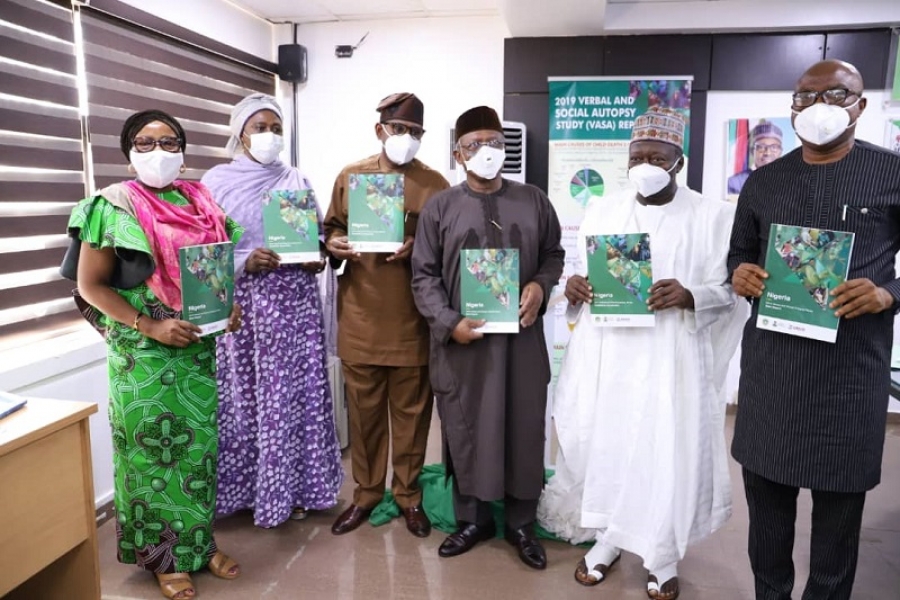 The Honourable Minister of Health, Dr. Osagie Ehanire has said that data generated in the 2019 Verbal and Social Autopsy (VASA) survey will provide the information needed to identify key deficits.  It will also help us channel resources to address developmental needs, as well as monitor and evaluate progress towards meeting our Universal Health Coverage agenda and of the Sustainable Development Goal 3, with regards to maternal and child health in Nigeria.

Dr. Ehanire made this submission at the official launch and national dissemination of the 2019 Verbal and Social Autopsy (VASA) study undertaken by the Federal Ministry of Health in conjunction with the National Population Commission (NPC), which was held physically and virtually on the 6th of November, 2020 at several locations starting with the Federal Ministry of Health, Abuja, National Planning Commission Auditorium as well as Shehu Musa Yar’Adua Centre, Abuja.

The Minister of Health informed his very large audience that the Verbal and Social Autopsy Study provides an up to date health and social indicators on under-5 deaths in Nigeria and the distribution along geopolitical zones and individual States. “The high ranking of the health sector among the nine priority areas of the current Administration is an indication of the President's vision and Government's commitment to promote health and well-being of all Nigerians. The 2019 VASA report is thus a vital tool in the critical initiative to improve the health of infants and children and also maternal health”, he said.

Dr. Ehanire further disclosed that the VASA report is the product of the sound collaboration of several organizations with the Federal Ministry of Health and the National Population Commission, including Development Partners, led by the United States Agency for International Development (USAID). “It is gratifying to note that the indicators from the report represent key areas of maternal healthcare (women aged 15 – 49, Child Health, Nutrition and Child Mortality”.  He called on all Federal Ministries, Departments and Agencies, State Governments, Local Governments, Organized Private Sector and Civil Society Organizations to feel free to make use of the 2019 VASA data for planning and development purposes.

Earlier, the Honourable Minister of State for Health, Dr. Olurunnimbe Mamora who gave the welcome address said the 2019 VASA report will be a veritable tool for planning for neonates, children and maternal health in the country.  He disclosed that “The VASA survey was a follow up to the 2018 NDHS, where a total of 3,215 under-5 mortality cases were selected out of which 31 percent (974) is neonates while 69 percent (2,241) were Children.”

“In Nigeria, the most common causes of neonatal deaths including pre-term birth (early birth), birth asphyxia, pneumonia and meningitis, the Minister disclosed.  Other causes are tetanus and malformations just to mention a few.  He went on to add that other causes of infant and child deaths are religious beliefs, socio-cultural practices, age and education of mother, socio-economic status of household, illness recognition, and quality of care and health system factors.”

Dr. Mamora while commending the various stakeholders involved in the collation of the data findings, expressed optimism that with the launch of the data, the VASA Study will find usefulness by policy makers and all stakeholders “to design programmes of better health care delivery in Nigeria.”

Earlier also in his own intervention, the Chairman, National Population Commission, Alhaji Nasir Isa Kwarra revealed that the Verbal and Social Autopsy Survey is a study that seeks to ascertain the causes and determinants of under-5 mortality in Nigeria between 2013 to 2018. He also said that the 2019 VASA survey was the second in the series, after the maiden edition that was conducted by the Commission in 2014 which involves selected households across the country.

He pointed out that the 2019 VASA edition which was a follow up to the 2018 National Demographic Health Survey (NDHS), randomly selected deaths from households with under-5 mortality cases.  The deaths were selected out of which 31 percent (974) are neonates while 69 percent (2,241) are Children, spreading across the country.  He instructively remarked that the regional spread of the occurrence of death during the period under review were 614 (20 percent) of the total deaths and were in the Southern part of the country while 2,601 (80 percent) occurred in the North.

Arising from this ugly trend, Alhaji Kwarra called for a purposeful intervention and programmes from all concerned to reduce under-5 mortality in Nigeria.