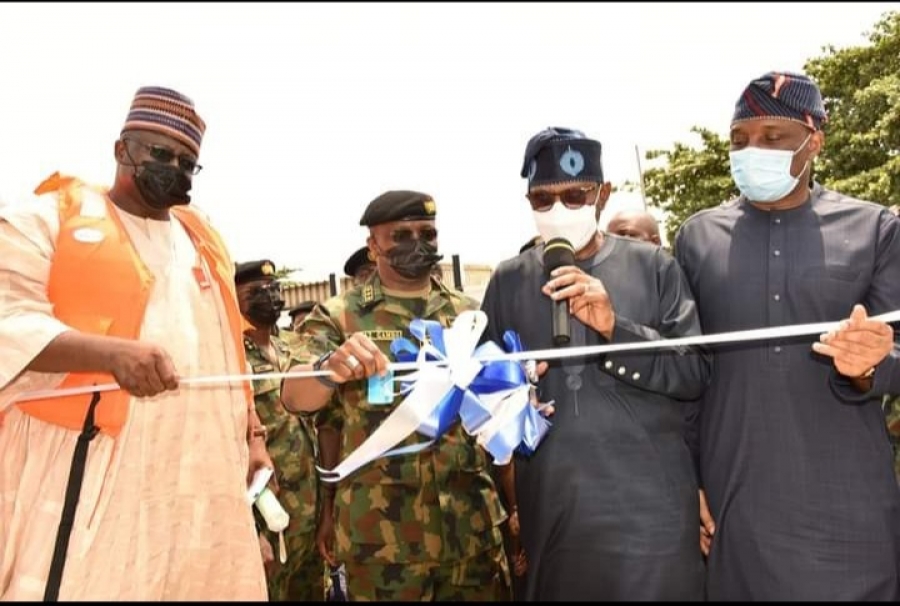 In keeping with its commitment of addressing problems confronting various communities across Nigeria, leaving no part of the country to suffer neglect owing to its geographical location or political consideration. The Federal Government has on the 6th of March, 2021 commissioned and handed over the Jetty and Shoreline protection facilities at the Underwater Warfare School Ojo, Lagos State.

The Honourable Minister of State for Health, Dr. Olorunnimbe Mamora who represented President Muhammadu Buhari as the Special Guest of Honour at the commissioning stated that the construction of the jetty and shoreline protection facilities will bring about huge relief and ease the fear of the menace of erosion and other ecological challenges.

Dr. Mamora revealed that the jetty and shoreline construction is a Federal Government intervention project, executed through the Ecological Fund Office, Office of the Secretary to the Government of the Federation for the benefit of the Nigerian Navy and the Underwater School in Lagos. He said the Federal Government approved swiftly the request for the project in the 2nd quarter of 2018 because of its strategic importance especially in the capacity building of the Nigeria Navy. “The provision of a modern jetty and protection of the shoreline as well as upgrade of the existing system will no doubt meet the benchmark of a world class training arena for the Nigerian Navy in line with international best practices the Minister stated.”

The Minister went further to say that the project has a dual mandate of enhancing the professional competencies of the officers and men of the service and by extension stimulating their aggressive drive of securing the country against any criminal act and security challenges such as maritime crime, piracy, banditry, oil bunkering, kidnapping and insurgency.

He extended profound gratitude and appreciation to the Lagos State Government, the Chief of Naval Staff and the entire people of Lagos State for their cooperation and support during the project executive while tasking them to cherish this laudable project and protect it from any abuse, “it is the responsibility of the school to own and maintain the project to ensure its sustainability this he stated.”

Earlier the Permanent Secretary Ecology Fund Office, Dr. Habiba Lawal represented by Alhaji Yusuf Addu, Director Drought Desertification and Coastal Zone Management, said that the risk of shoreline erosion and its negative consequences necessitated the prompt intervention of the Federal Government in effecting holistic approach to the control and flooding, that would stand the test of time and address the issue of shoreline erosion menace caused by high ocean current and tidal waves over the years.

He urged the school authorities and indeed the inhabitants to ensure that the jetty and shoreline protection work is guarded jealously, knowing that this project intervention will provide succor to lives and properties.

The Chief of Naval Staff, Admiral AZ Gambo expressed appreciation to the President and the Ecological Fund Office for considering the Nigeria Navy as one of the beneficiaries of its mitigation efforts in line with Mr. Presidents pledge that no part of the country will be neglected under his administration.

He said the efficient and effective projection of sea-power by maritime forces is dependent on the physical configuration of the harbour jetties which constitute a critical interface connecting the sea and land. The shoreline protection and restoration of the jetty would no doubt enhance Nigerian Navy maritime security operations. The timely completion of the project, he said has helped to stave off the fears associated with shoreline erosion including the attendant risk of flooding to the entire landscape.

The Chief of Naval Staff also seized the opportunity to solicit for more intervention from the Ecological Fund Office in other identified sites at the Nigerian Navy bases and Establishment namely; Escravos, Ibaka, Igbokoda and Calabar jetties. He said the Navy by such intervention will be more emboldened in the performance of her statutory role of maritime defence and security of the nation’s maritime domain. He went further to assure the Federal Government that the Nigerian Navy will take ownership of the jetty and shoreline protection facilities project by ensuring its stability and maintenance.

Tweet
Photo News: Dr. Mamora Pays Homage To Emir Of Gwandu The Achievements Of President Muhammadu Buhari's Led Administration In The Health Sector Has Been Under Reported....Dr. Mamora